Fun Under the Frescoes with Paul Sanchez - Tonight at St. Alphonsus!

Tonight is the night!! The Friends of Saint Alphonsus presents the highly anticipated second season of the Fun Under the Frescoes concert series at St. Alphonsus Church (2025 Constance St.) from 6:00 to 8:00 pm!

The series kicks off on November 14th re-living the magic of the premiere show of our series, with Irish Channel native Paul Sanchez with special guest Arsene DeLay!

Tickets are $10 and include 3 complimentary beverages (which includes craft beer, Jameson, margaritas and Pinot Grigio!!)  Memberships starting at $25 include admission to every concert!

Don't forget to come hungry - Ms. Linda the Ya-Ka-Mien Lady will be serving up some delicious food too! 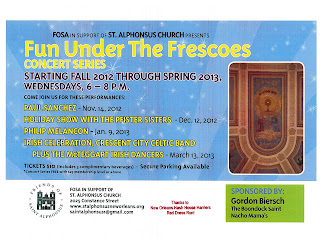 The beautiful harmonies of the Pfister Sisters resonate for our holiday show on December 12th.

Celebrating the rich history of St. Alphonsus, the series culminates on March 13th with an Irish extravaganza featuring the Crescent City Celtic Band and the McTeggart Irish Dancers.

In addition, beverages will be provided by sponsors including Gordon Biersch, Nacho Mama’s, the Boondock Saint and Vino Wholesale. A big thanks to the New Orleans Hash House Harriers - Red Dress Run for their continued support!

**St. Alphonsus Catholic Church was built in 1855 to serve the needs of the Irish Catholic immigrants who began settling in the neighborhood in the 1840s. In 1979, the church was closed. After a continuing fall into decline, FOSA was formed in 1990; in 1996, the building was declared a National Historic Landmark. With glorious, yet deteriorating, ceiling frescoes and stained glass windows over a century old, the building is breathtakingly beautiful and has been featured in Treme and several movies… and the acoustics rock!

Enjoy fabulous music with your friends and support one of New Orleans’ cultural treasures, the 155 year-old Saint Alphonsus Church. We will see you this season for Fun Under the Frescoes!

Have a wonderful Wednesday and for more fun shows and events going on click on the WWOZ Livewire - http://www.wwoz.org/new-orleans-community/music-calendar!

www.gratisnola.com
Posted by Aimee NOLA at 9:24 AM