The Krewe of Hermes kick off the parades Uptown at 6:00 pm!! The founding fathers of Hermes were local businessmen who formed and incorporated their organization in 1936. The first ball and parade were held in 1937. As per tradition, the Hermes captain leads the procession in full regalia on a white horse.  Often named one of the most beautiful carnival parades of the season....you don't want to miss this one! 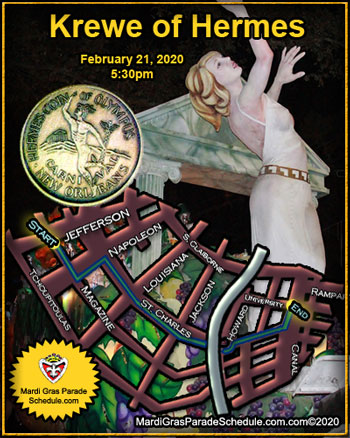 Le Krewe d'Etat rolls at 6:30 pm...The highly satirical krewe keeps its theme secret until the parade rolls. The name is a pun on "coup d'etat", which is the takeover of a ruling party by an outside force. The krewe "heeds only edicts from their Dictator, whose identity is never revealed." The organization's most coveted throw is a strand of glow-in-the-dark beads with green eyeballs.

The famed Budweiser Clydesdales will lead the parade up the longer Uptown-to-Downtown route, an idea initiated by the D'Etat captain. Nearly a dozen marching bands (St. Augustine, Brother Martin High School, Citadel's Summerall Guard, Central Lafourche High School, the St. Charles Streetcar Band and others) are also scheduled to provide musical accompaniment as the parade sojourns through town.  The identity of the "Dictator," as the D'Etat monarch is known, is never revealed. He will ride on his own signature float, followed by the Dictator's Banana Wagon, the High Priest float and others. 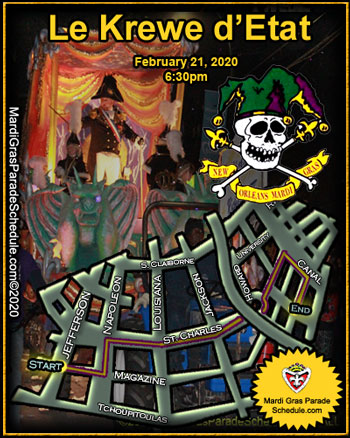 Established in 2000, the Krewe of Morpheus is named for the god of dreams and follows d'Etat at 7:00 pm! The krewe strives to be both inclusive in membership as well as provide parade goers an 'old-school' parade experience. Morpheus is one of the largest co-ed krewes in the area and kicks off the long weekend leading up to Mardi Gras. 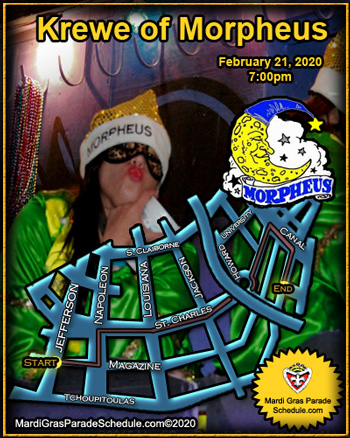 And after the parades you got music!!!

Sorry, folks, I'm feeling lazy...the morning after parades will do that to you...don't forget the free shows at the Howlin' Wolf the next few days - Check out Chickie Wah Wah's (2828 Canal) Endymion party tomorrow (great place for music, food and clean bathrooms!!)